Pantrypoints arose from Juan’s personal research on the 2008 Financial Crisis which led to the 2008 Food Crisis, 2011 Arab Spring, and the Eurozone crisis.

The 2008 Financial Crisis arose from Allan Greenspan not doing his job of regulating the banking industry, citing Adam Smith who advocated non-regulation. So Adam Smith should be such an evil guy for causing so much trouble, right?

By going through Adam Smith’s works, we saw that he actually advocated the strict regulation of banking, comparing it to the building of firewalls to prevent the spread of fire. More importantly, Smith was advocating a totally new economic system that used human effort and could do away with money.

This is what Pantrypoints aims to realize.

An Economic System That Has Its Own Science #

Superphysics is divided into 3:

The Church of science would say that all of this is false belief or pseudo-science. We would rather say it’s Superphysics or Socratic Dialectics.

Built for the 2019 Crisis and Great Stagflation #

Smith’s Digression on Silver talks about a 500-year pattern of prices which we extended to modern times. Juan found that all great crises in the 20th century followed the extended pattern. It pointed to a series of crises from 2019 onwards where prices will go haywire, a period which we call The Great Stagflation. 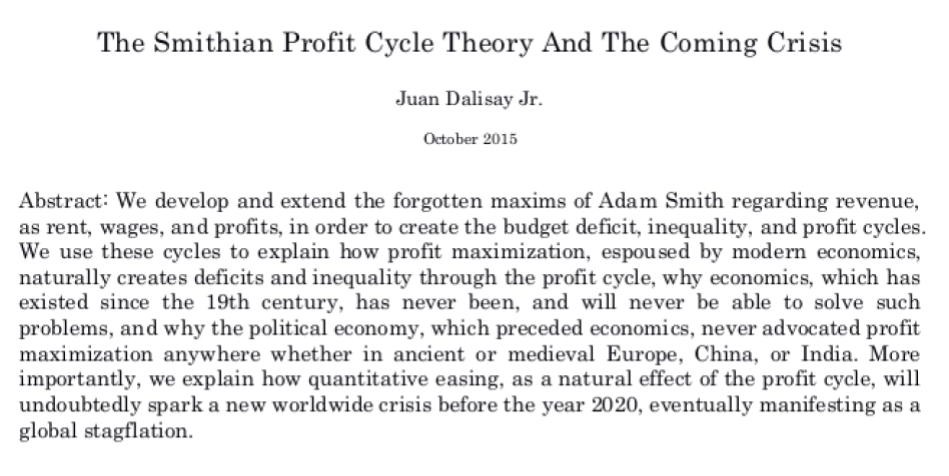 Our goal is to implement Smith’s alternative economic system, as Pantrypoints, during those crisis years. This is because the supply chain and financial systems will break down during those times, as they evolved from Mercantilism.

*Update April 2021: The crisis years came via Covid. It turned out that the medical system was the first one to break down. Our model predicts that the financial system will be the next one to crash at year X. Economic and political systems will be stressed much later.

We are looking for universities that would be interested in our theories, publishers interested in our books, and companies and angels that would like to invest in a resilient economic system that will preserve their businesses and capital during such a prolonged crisis. Feel free to contact us via email at [email protected]

We also accept donations in cash, kind, or labor (such as translating the posts or apps into your local language, or sharing our posts, apps, and pages). Every contribution is noted.

Where we got the ideas, and set our own ideas